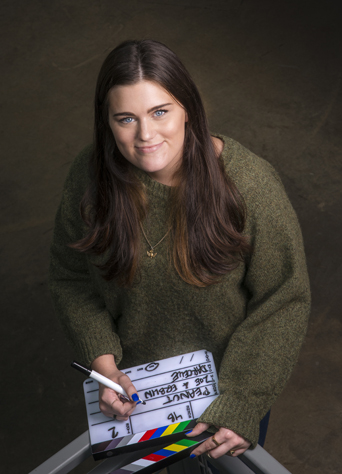 Zoe Peters, Film and Video Studies major, had an internship this summer through the Television Academy Foundation. Photo by Evan Cantwell.

As far as internships go, Zoe Peters landed a cool one in Hollywood that led to several professional connections that will likely elevate her postgraduate film career.

Peters, a senior film and video studies major at George Mason University, worked at Valhalla Entertainment led by CEO Gale Anne Hurd, the mind behind hits such as “The Walking Dead” TV series and “The Terminator” movies.

Peters was assigned to work at Valhalla after earning one of 50 coveted spots in the Television Academy Foundation’s Internship Program. Over the course of eight weeks, the program exposes students to the world of professional television production.

The Valhalla interns worked primarily with Vice Presidents Jeff Nemon and Phil Kobylanski, both of whom have highly impressive career trajectories, she said.

“It is was really satisfying professionally. I loved working for them,” she said. Because much of what she worked on is still in the development stage, she can’t talk about it yet.

“But I did get to help with script edits and transcribing for their new series ‘Lore,’ which is being developed with Amazon,” Peters said.

The series is based on a podcast by Aaron Mahnke, a writer known for supernatural thrillers.

“It was neat to be a fly on the wall as a series was reaching its final stages,” she said. “I saw multiple edits of ‘Lore,’ which was really cool.”

One of her main jobs as an intern was writing “coverage,” a summary with opinions and assessments of scripts, plays, books or novels received by the production company. The coverage helps producers and vice presidents decide if it’s a project they want to develop or if the writer is one they want to work with on current and future projects.

“You have to write both a summary and a comment section. It’s giving them your picture of it because they don’t have time to read all of it because there are so many scripts coming in,” she said.

At one point, she was able to read an entire series and give the producers details they could potentially pitch and shop around to television networks, Peters said.

Her coursework at George Mason helped prepare her for writing coverage because it gave her an understanding of screenplays and what to look for in a story’s structure.

“I wrote quite a few pieces of coverage for Gale Anne Hurd, specifically. I was the only intern in our group to be assigned coverage for Gale, which is apparently a bit of an honor because they want to make sure anything that crosses her desk is at the highest level.”