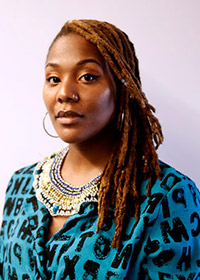 Sierra Leonean-American filmmaker Nikyatu Jusu's films have played at festivals nationally and internationally, garnering her many laurels and awards. Her first feature film, Nanny, debuted at the 2022 Sundance Film Festival, where it won the Grand Jury Prize (US Dramatic). Professor Jusu is the second black woman director and Nanny is the first horror film to be so honored: the film is opening in theaters and streaming on Prime Video in Fall 2022. The rights to her next film project have been won by Universal Studios and Jordan Peele's Monkeypaw Productions.

Professor Jusu developed Nanny as a Fellow at the Sundance Institute’s 2020 Directors & Screenwriters Lab. In 2022, she received the inaugural MPA Creator Award, and appeared with Nanny at New Directors/New Films in New York City.

Three of Professor Jusu’s short films were acquired by and aired on HBO, including Flowers and Suicide By Sunlight. The latter was funded by the production grant "Through Her Lens," sponsored by the Tribeca Film Institute and Chanel. This short film was also awarded a Rooftop Films/Adrienne Shelly Foundation Short Film Grant, and debuted at the 2019 Sundance Film Festival.

Professor Jusu earned her M.F.A. in Film Production from the Tisch Graduate Film Program at New York University, where she was awarded the Spike Lee Fellowship and the Princess Grace Narrative Film Grant. She has a B.A. from Duke University in Literature and Film. Nikyatu Jusu’s filmography straddles the lines of social resonance coupled with “butts in seats” storytelling. Race, nationality, sexuality and mental health are central themes in her oeuvre, which consistently centers nuanced portrayals of women. Professor Jusu draws from a myriad of sources, including African Diasporic mythology/folklore and contemporary social issues affecting historically marginalized communities.