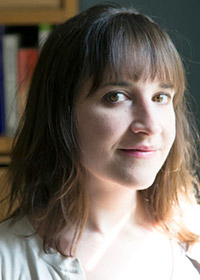 Maura Ugarte holds an MFA degree in Film and Media Arts from American University, where she also worked as a Fellow at the Center for Media and Social Impact, and a BA in Film and Video from Columbia College Chicago.

Professor Ugarte’s work focuses on exploring how documentary can be used to deconstruct and recontextualize dominant narratives about how we see ourselves, our communities and our history.