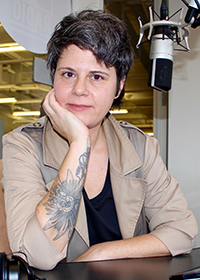 Professor Giovanna Chesler (they/them) directs documentary and narrative films that address sexuality, the body, and gender and racial justice. Their films have been exhibited at hundreds of film festivals worldwide and in museums and gallery spaces. They currently serve as a juror of several international artist granting programs, advise documentary filmmakers, and volunteer as a juror of film festivals. They are a 2021, 2020 and 2019 Media Arts Fellow awarded by the Washington DC Commission on the Arts and Humanities.

Professor Chesler has directed ten films including their recent short documentary W. C. Taylor High School: A Legacy made as a co-Production of the Mason Film Lab and in partnership with Black alumni of the first high school to serve African American Students in Fauquier County, VA during segregation. Their fiction drama The Pick Up was awarded Best Short Fiction Film (Audience) at Cineffable Paris International Lesbian and Feminist Film Festival and Best Short Film (Audience) from image+nation in Montreal. Also a screenwriter, their feature screenplay, Sweetheart Ranch, advanced to the second round of the 2019 Austin Screenplay Competition and was a semi-finalist at the 2019 Vancouver International Women Film Festival Screenwriting Competition. Professor Chesler’s other recent fiction shorts include Java and Bye Bi Love. Their hour-long documentary Period: The End of Menstruation looks at cultural and medical trends in menstruation and was covered on the front page of The New York Times as a touchstone on the debate over menstrual suppression. It was the most emailed NYT article for two days and received international press attention, demonstrating how this taboo subject deserves wider discussion.

Professor Chesler worked as Associate Producer and Co-Editor on Zeinabu irene Davis' feature documentary Spirits of Rebellion: Black Cinema from UCLA which was awarded Best Diaspora Documentary at the African Academy Awards and Best Documentary – Jury and Audience at Blackstar Film Festival in Philadelphia. Professor Chesler produced the POV / ITVS funded documentary feature Out in the Night (dorosh-walther, 2015) which won fifteen awards and launched the United Nations’ Free + Equal film campaign in 70 countries. As a Producer, Professor Chesler was selected to participate in the Film Independent Artist Development Program Fast Track and has been recognized by the Washington DC Office of Cable Television and Film as a Filmmaker of the Month.

Professor Chesler’s scholarship focuses on sound, documentary and community engaged learning. They teach courses in fiction directing, screenwriting, and interactive storytelling. Their new essay, interviews with parents and educators “Parenting and Professoring in the Pandemic” will appear in a 2021 edition of Jump Cut.