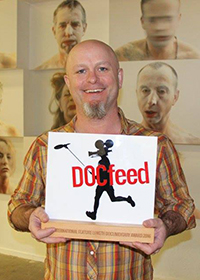 Benjamin Steger has been making films and videos since the 1990’s. He has considerable experience as a director, producer, documentary cinematographer, editor, and sound recordist for documentary, fiction and institutional films. He holds an M.F.A. in Film and Video from Columbia College Chicago and a B.A. in Theater and Film from the University of Kansas.

His latest project, Vibrations, is a documentary series on contemporary world music, the first season focusing on the music cultures of Southeast Asia. The project received a 2018 Summer Impact Grant from George Mason University’s Office of the Provost which enabled four Mason undergraduate Film and Video Studies students to work with Steger in Cambodia, Thailand, and Vietnam on the series.

Left Field, a feature length documentary directed by Steger about an oddball community of artists, musicians and misfits that coalesce around the grade school game of kickball, screened at the Gene Siskel Film Center in Chicago as well as the Austin, DocuWest and DocuFest film festivals among many others.

Great Bend, a short fiction film written and directed by Steger was selected as a “Critic’s Pick—Best of Festival” at the 2006 Kansas City Filmmakers Jubilee by film critic Robert Butler of the Kansas City Star.

Steger was commissioned by the National Park Service to create two short videos that were made in cooperation with George Mason’s Center for Climate Change Communication. Mason students and alumni acted as crew, gaining valuable experience and employment.