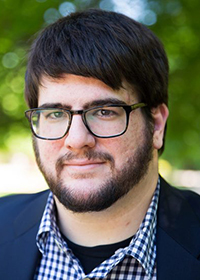 Andrew Jorgensen is the Technical Coordinator for the Film and Video Studies Department. His career as an technical supervisor started at 1st Stage Theatre in Tysons VA, where he served as the companies technical director, and master electrician for three seasons between 2010 and 2013. During which he saw the company nominated for two Helen Hayes awards in technical achievement (sound and lighting design), and receive praise from publications like The Washington Post and The Wall Street Journal. From there he went on to serve as a projection manager for a world renowned art house cinema brand, the Angelika Film Center at Mosaic and the Angelika Pop Up at Union Market in Washington D.C. There he maintained projection systems for 11 screens, and help coordinate technical requirements for numerous events including corporate meetings, weddings, and film festivals (such as DC Shorts and Northern Virginia International Film Festival). He served as projection manager from 2012-2015.

Andrew has been making and producing short films for over 15 years, having worked on personal projects, tv shows, feature films, industrial content, he has seen the industry make the transition from film to digital. In that time, Andrew began his studies in cinematography at Columbia College Chicago from 2007-2010. After having worked across the entertainment industry for a number of years Andrew transferred to Mason to complete his studies in 2015, where in the spring of 2017 he graduated with a BA in Film and Video Studies.

Andrew is currently pursuing his Masters of Fine Arts in New Media Art, part time, with the School of Art. In 2019 he received one of three Inaugural Young Alumni Commissioning Project Awards, to produce his short film, The Sun and The Medicine Man. He is currently in development on a feature film titled Secret Lives of our Parents.